The goal of this Case Study was to analyze FARR Plunger performance based on data from the Coalinga field to compare the performance of the FARR Plunger to other plungers used in the same wells. Based on field observations, the FARR was suspected to provide longer runtimes on average and require fewer well pulls than other plungers used in the same wells. Ultimately the purpose was to determine if the observations could be supported by quantitative analysis, and if so, see how much longer FARR runtimes were on average.

Data was collected over a 1.5 year period

Over 700 producing wells in Coalinga field

Average cost of each well pull

The Battle of Runtimes

Paragraph setting up how stats were collected. In order to keep the match up fair 2 different pump shops were used for the study in different locations along side FARR. All pumps were tested in different geogrpahical areas so there would be no bias that one was tested in more trying terrain over the others. This allowed for no statistical difference between the two. Assembly bias was not an issue. FARR ultimately had a 216% longer projected median runtime. The FARR Plunger pump has a 216% longer runtime over the average sand tolerent pump.

The survival plot shows that there is no statistical difference between the two pump bore sizes based on the overlapping curves and additional statistical analysis. We conclude that the FARR runtime data is not biased based on pump bore size. 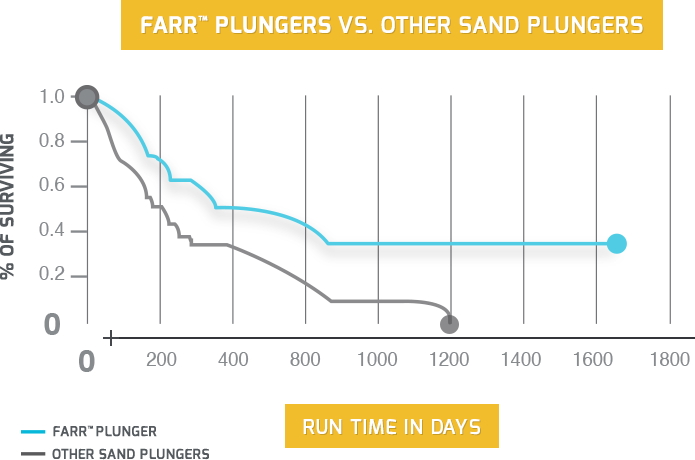 “As the percent of FARR Plungers still running decreases, it will be interesting to see how much greater the percent improvement gets.”

All said and done, during a time in the industry when every dollar counts