The First Testing of FARR Plunger

We had to put our money where our mouth was, here it is.

Let's get to it

The first FARR Plungers were run in late 1999 and early 2000. Several of these plungers experienced severe wear and were removed from service. Inspection of these failures led to the elimination of the rough spray metal finish. Many of the original smooth surfaced plungers are still in operation today.

Run time comparisons between conventional and FARR Plungers is complicated by the relatively short history of the FARR Plunger. Table 1 is a summary of field experience with the FARR Plunger in the Midway Sunset Field. This data, which summarizes the results of three different operators in the field, indicates that the run time for conventional pumps and plungers in these wells was 210 days.

The 33 FARR Plungers installed in these 31 wells have run a total of 6,125 days as of January 23, 2001 for an average run time of 186 days. Most of these original FARR Plungers are still in operation. This average run time will increase as these plungers continue to operate. (Later follow up showed the FARR Plunger averaged nearly 3 times the run life.)

The FARR Plunger has also been utilized in other California oil fields. The plunger is currently in service in the Coalinga, Belridge, and Kern Front fields in addition to the Midway Sunset field. Field trials are expected to start later this year in the Duri oil field of central Sumatra in Indonesia.

One operator reported a case in which the well could not be pumped with a conventional plunger. The well was equipped with a FARR Plunger, and the well was placed on pump. This well sanded up after 13 days, and was then left idle. Although the plunger did not experience a long run time, the operator was able to lift fluids from the well. The experience with this well does point out a limitation of the FARR Plunger. The FARR Plunger will not, however, stop wells with high concentrations of sand from sanding up. The lifting velocity of the produced fluid has to exceed the settling velocity of the sand grains in thetubing to prevent the sand from accumulating in the tubing string and eventually sanding up the well.

The Average run time for the FARR Plunger in these wells was 187 days.

The purpose of the Study 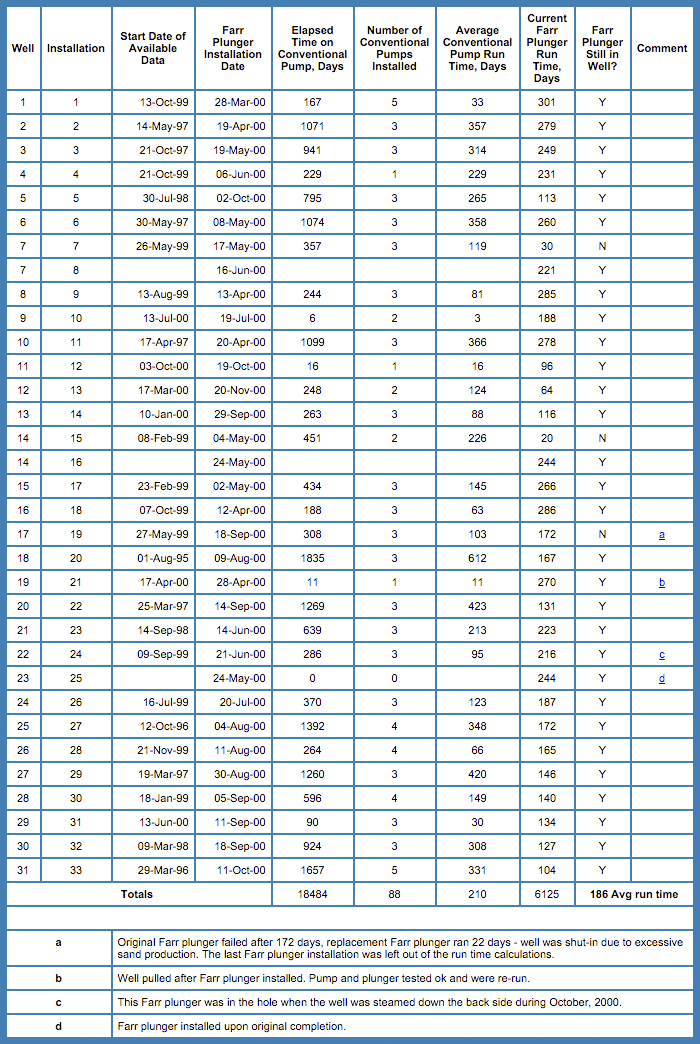